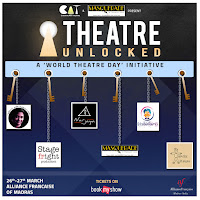 World Theatre Day is celebrated on MARCH 27th annually, since the 1960s, across the world in a big way. In Chennai too, city’s theatre groups have individually for the past few years celebrated MARCH 27th.

Masquerade started celebrating WORLD THEATRE DAY in the year 1997, when its Founder-Artistic Director, Dr. S. Krishna Kumar, came back from Berlin, after a stint at professional theatre in Germany, where he met international artists at a World Theatre Day celebration in 1996. Since then, Masquerade has celebrated World Theatre Day annually.

This is the largest coming together of city’s theatre groups in more than a year, since the city went into LOCKDOWN due to COVID-19.

CAT & Masquerade are UNLOCKING THEATRE back to its LIVE status. Hence THEATRE UNLOCKED.

THE SIX PLAYS AND DETAILS:

Bahishkaara (Relegation) brings together the untold stories of unsung heroes from the great Indian epic. The play seeks to unearth the tales of Duryodhana, Aravaan, Shikandi and a few other overlooked yet salient characters through music and dance.

A man, a woman and abundance of time. It’s funny, it’s scary and it’s real.

‘Pasi’ is a Tamil absurdist fiction written by Padmasri. Indira Parthasarathy, who is the only Indian writer to have won both the Sangeet Natak Academy and the Sahitya academy award. Crafted in a space supended from time, ‘Pasi’ (hunger) is a play to look forward to.

Three couples, three different conversations and coffee. Some humorous, some hilarious, some whacky! Sure to leave you entertained!

Adapted from Holidays! by Ethan Tucker

A woman, Goddess nonetheless… A man, a grandson with a duty… and their gripes and coffin tales! Two hilarious takes on marriages, affairs, legacies!

Two different scenarios…two variations on the same theme ….. quest for a soul mate !!! Or is it sole mate ? Come with your funny bones… if not with a mate.

The Language of Love : Language is essentially a tool of communication that should bring people together in an exchange of ideas. However some people use language to incite hatred or to hide the truth: politicians are masters in this. So sometimes it is necessary to invent a new language… especially for love.

The Mating Game: Since time immemorial man’s quest for a mate has involved meandering in a tortuous  labyrinth  of relationships and lost chances. One wrong word or a gesture can break a burgeoning romance. So what is the secret to this mating dance? Perhaps it is just the hand of destiny!

Each of the performances would be followed by a moderated audience Interface with the Director/Production Company (if the company is open to it!)

Masquerade presents World Theatre Day 2020
A FREE TO REGISTER, public participation event, inviting artists and theatre enthusiasts to join in celebrating World Theatre Day. The day is being celebrated for the 22nd year in Chennai by Masquerade – the performance group, ChennaI. For more details on World Theatre Day, visit: https://iti-worldwide.org/worldtheatreday.html
Some may say this is not the time to celebrate. But in times of contagion and life threatening crisis like this, if we do not celebrate life, and its ONE TRUE MIRROR, live theatre, when then?
It is our responsibility and privilege as artists to exhibit freedom… Come join us, the online stage is yours.
Public Performance Event
Genre: Any that you may choose
Duration : 1 to 10+ minutes (not exceeding 12 please)
Language : Tamil, English or Mime preferably (but any that you may choose)
PS: Nothing Filmy, or anything from films. Create your own original piece. WE WANT YOU TO BE YOUR ORIGINAL YOU. We want your theatrical talent to be featured, showcased. Please do grace our World Theatre Day celebrations with YOU.
This is not an age restricted event. Young talents are allowed too. Therefore, in public interest, Strictly please, no verbal or physical violence, political, personal or COVID19 propaganda statements.
REGISTRATION & PARTICIPATION FREE.
YOU CAN EVEN PARTICIPATE AS A DUO OR GROUP SO LONG AS YOU’RE ON SAME SCREEN AND HANDLE
To Register CLICK HERE
Posted by Krishna Kumar. S at 10:05:00 PM No comments: